Ultimately, tai chi works on health first of all.
If your body is not strong, fit and balanced, what use is it in self defence?

You may take longer to gain combat skills, but how many other martial arts can be trained almost all of your life?
How many medical studies/journals cite the positive health benefits of tai chi?

Do you read any equivalent journals regarding judo?
Maybe, but it seems doubtful.
In some martial arts you are deemed 'a veteran' by the age of 40. You gracefully retire and become a judge/referee.
No comments:

Every martial art requires dedication and commitment. There are no shortcuts or exceptions.

Internal or external arts are the same in this regard.
Although the training itself may be markedly different, the need for sustained hard work is the same.

If you expect to use tai chi as a martial art, be prepared to put in the time and effort.
No comments:

We cannot cover every topic every lesson. There is not enough time.

If you are unsure about a topic, then ask.
We can either look at it after 8:00 PM as part of the lesson.
Remember: you must practice and maintain the skill for yourself.

You will not remember a topic if you do not practice it.
No comments:

It is very common for students to imagine that private lessons and long-term practice with an instructor guarantees receipt of the inner teachings.
This is naive.
Traditionally, the secret workings of an art were passed on to family members first.
After family members, lineage students were the next consideration.

Everyone else was taught relative to their degree of commitment, and this seldom entailed the secret material.
No comments:

Remember, it is up to you how much or how little you choose to train.

You may want to do a lot. You may not even want to train at home.

That is fine. It is your choice.
No comments:

Be gentle with your body. Treat it with care.

High repetitions and exotic stances are not tai chi training methods.
Train with mindfulness.
With attention.
Pay attention to what you are doing, and train it slowly, thoroughly and cautiously.
If anything feels unpleasant, something is wrong.
No comments:

It will not get easier.
If you are lazy now, expect difficulties ahead of you.

We are expecting your fitness level to improve as you move up the curriculum.
This should happen naturally.
You grow stronger, fitter and far more capable.

But it will not happen by itself.
No comments:

The trick with tai chi is to keep your training mild.
It is not a gym workout.
You are not meant to be sweating and straining.

Go easy on yourself.

Little and often is the key.
If the training is gentle but works your muscles nicely, then it is easy to sustain and your energy levels will stay high.
Overdo-it and you will suffer from fatigue, aching joints and sore muscles.
No comments:

This is the cornerstone of your tai chi training.

If you are neglecting to practice this daily at home, then you are missing out on a major training opportunity.
The form offers you a chance to train everything at the same time.
No comments:

In the Western world we have no conception of how hard Chinese and Japanese people traditionally train.
We are soft and lazy.

Our culture is idle and pampered. We want everything doing for us.

In the martial arts, the hardship and the work is the whole point of the training.
You are not working towards a goal. You are simply working.
No comments:

If you train the qigong exercises at home every day, your chest will open and you will start to develop greater strength.
You will breathe more deeply and your endurance will improve.

There will be a notable change in your physical appearance.
No comments:

The less you try, the more will happen.

'Folding' and 'sung' will be introduced in the experienced syllabus.
These two qualities are passive; they are allowing rather than doing.
They teach you to 'step out of your own way' and let the tai chi do its work.

As a beginner you must learn to relax.
Do your moves in an almost dreamy manner; drifting rather than forcing.
Pause regularly and allow your weight to settle.

Power will grow imperceptibly.
No comments:

More to life than money

The philosophical side of tai chi suits the older mind. You have lived a little, and you can look back and contemplate. What you explore in the tai chi has context, it can be applied to the fabric of your life.

There is more to life than money. Instead of having a mid-life crisis, learn tai chi. Do something practical.
No comments:

Tai chi is often seen as being a bit 'theatrical'.
It lacks the apparent brutality of boxing or karate.

The emphasis is upon gentle qualities: softness, yielding, receptivity and openness.
Ask yourself: do these indicate fear?
Which characteristics suggest fear: a tense, locked, hunched body or a friendly, relaxed, open one?
No comments:

The standard Yang set today is Yang Cheng Fu's final revision of 85 postures, which he demonstrated in his book published in 1936. Most of the other books published since then, including many Western ones, are either variations or reflections of the author's own personal expression of the set.

One should note that right from its creation, Yang tai chi has always been combat-oriented. Yang Cheng Fu always emphasised that the set should be practiced with its martial applications in mind. These applications may be taught through the fast set, individual posture explanations, tui shou (push hands), san shou (fixed-step sparring) and san da (free sparring). 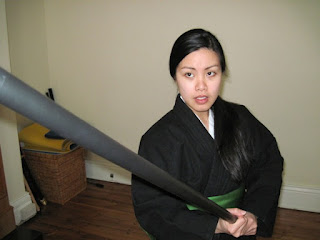 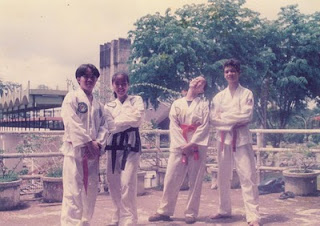 Rachel in her tae kwon do costume. Half a lifetime ago.
No comments:

Today I finished learning the pattern of the sabre form. I'm really happy. It was hard work but seems quite short in hindsight. Learning the YCF and baguazhang palm changes was much harder! 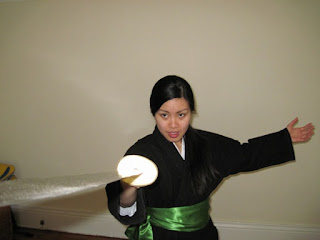 Modern life is filled with distractions that distort your perception of reality and make you feel strung out and tired.
Television, computers, junk food, noisy neighbours, work, videogames, mobile phones, driving and family problems can all make you feel unhappy and agitated.

It is important to find ways to earth yourself. To be centred once again and complete.

To find stillness and quiet. To rest. To stop. Exotic practices are not required.
You do not need to join some esoteric meditation group.
You can find tranquillity and balance without even leaving your house.
No comments:

The experienced student finally learns how to use the art.
They have accumulated enough knowledge and practice for the power to have grown.
When the power reaches the necessary level, taijiquan skills emerge without effort or contrivance.

The student has changed: physically, mentally and energetically.
They are skilled enough to accord with the way, and can borrow power (te).
No comments:

I never get the chance to talk to you as we leave in a hurry after class but I would like to say in this email how much we admire and respect you, your clarity and common sense approach to many aspects of the martial arts cuts through so much crap taught by others; we are humbled and honoured for you allowing us to train with you, I do not think some of the other students understand the difference between other classes and yours, believe me we do; I guess because we involved with other stuff we can appreciate just how awesome the art is you teach.
I was talking to Jonothan going home tonight and we remarked on just how deep Tai chi penetrates into every aspect of our lives, moving, thinking, interaction with others, it really pervades everything you do when you allow it to.
It must be frustrating to have all this cool stuff and not be able to get it across to the general public.

When a student misses a lot of lessons it is common for the quality of their tai chi to severely diminish.

We offer two opportunities:
Option 2 costs £25 and the student will be assessed by Sifu Waller and awarded the appropriate grade.
No comments: 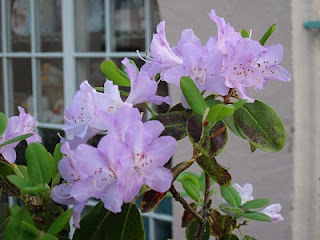 If you are tired and out of breath after a few minutes of training, then you are simply not fit enough.
The training has barely started.

You must improve your fitness considerably if you want to complete the fundamentals.
This means training qigong and form regularly, along with perhaps walking, jogging, swimming or cycling between lessons.
No comments:

People like the idea of tai chi but not necessarily the reality.
They want a quick fix, instant fighting skills or the ability to perform beautifully choreographed routines after a couple of lessons. This is fantasy.

Some unscrupulous teachers promise tai chi skills overnight but they are deceiving their students.
As with any martial art, a tai chi student must commit to weekly lessons and daily practice.
There are no shortcuts.
No comments:

It is important to remember that a martial arts class is not modern in nature.
When you enter the training hall, you must leave modern culture at the door.
You are partaking in a tradition that has continued for centuries.

Fashion, politics and mass media are ephemeral things. They have no substance.
Tai chi has been practiced for centuries.
No comments:

If all you learn is a lot of forms, you just become a good dancer.

The title of Lao Tzu's book 'Tao Te Ching' is often translated to mean the way and its power.
This can be misleading, as many people assume that tao means way/road/route and suggests a path of some sort.
The book is an investigation of reality itself.
Lao Tzu studied nature and existence in order to better understand the way in which the world operated.
Modern physics does the same thing but works on the basis of hypothesis; which means starting from the known in order to understand the unknown.

Whilst both taoism and physics study the physical world, they differ quite radically in approach.

Taoism recognises that a person must lose knowledge - in the form of comparison, conditioning, education, measurement, opinions, preconceptions - in order to see reality without bias.

There is a folly in applying the characteristics of the known to the unknown.
No comments:

Modern culture is filled with people who have 'attitude'.

Being cocky and macho is applauded. Showing off is encouraged.
People like to be sarcastic.
They enjoy being a 'smartass'.

Television is littered with talent shows and programmes that embrace the more unpleasant aspects of human nature.
Ugly traits are fostered.
No comments:

Students of tai chi often want to learn tai chi as a martial art.
Having read a few tai chi books, they expect to acquire skills that exceed those of wing chun, karate, aikido or ju jitsu.
This sounds like a reasonable ambition.

But the individual is seldom prepared to put in the time or effort necessary.

A student of judo may train 2-3 times a week in class.
How can a tai chi person expect comparative skills when they only attend 1 class each week?
No comments: